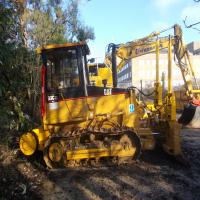 am in the Glasgow/Edinburgh this week and was wondering if there was any RRV Depots or viewable Access points near stations ?

many thanks in advance

Things starting to gear up near to Queen Street.

The station and line from Cowlairs will be closed from 20th this month for 20, yes twenty weeks.

All to do with EGIP (Edinburgh-Glasgow) Improvement. Electrification of the Line.

TXM Moving in plant from 16th

I am based in the West so cant be of great help to you for the East side, ie Falkirk to Edinburgh & surrounding area.

If going by train, as I guess you are I suggest that you take the stoppers as you will have a better chance to get things.

Just over 1 mile from the station on LEFT KEPPOCHHILL RD

Right across from that a new Compound going in. No Plant been seen on there as to Friday last week

Also COWLAIRS AP Story, Quattro & Aspin been in there

BISHOPBRIGGS STATION 1st Stop (Nothing There Keep on Train)

Plenty of stuff on there

Friday the ABC Wiring Train, in the Middle of the yard but the 1st stuff you will see is some SRS units UK08SRS being 1 of them, QTS Chipper, TRAC SV201, AB2000 NAM at the other end of the yard were 3 Story units and some trailers. Probably more stuff came in over the weekend.

Next station Lenzie. Don't get of.

After that CHANGE TO LEFT HAND SIDE

About 2miles is GARTSHORE CEMENT WORKS

Can give some more and will do

Give me a call on mobile

All rail travel between Edinburgh, Stirling, Perth, Aberdeen, Alloa to QS will be drastically altered

See you were up last week.Pity you didn't contact me. Had a couple of days free.

The CARS Easter Aberdeen trip passed a yard at Castlecary, Cumbernauld, visible from the M80 on 28th March 2016 - this held four unidentified R/R Access Platforms and an unidentified R/R excavator - any help in identifying these would be most appreciated

Happy to be of help. Feel free to email me. Address available through OTP. Sorry but email listed previously, in this thread, is incorrect